SWEETWATER, Texas (KTAB/KRBC) – The City of Sweetwater broke ground on one of the largest housing developments in the city’s history on the morning of March 14th, 2022.

Lubbock-based housing developers Rick and Holly Betenbough were on a road trip visiting friends when they decided to stop off in Sweetwater on a business call. 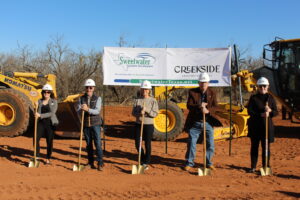 The Betenbough’s, along with membersSweetwater Economic Development Board and staff, met at Buck’s restaurant to discuss a new housing area in north Sweetwater.

“Our hearts just broke for the people, the families, that were going to drive 45 miles to commute and not live in a community,” Holly Betenbough said. “We really started praying about how we might could help, and while we can’t build homes here, we can help develop homesites.”

The Betenbough’s had not planned on building in Sweetwater, however, they could develop the plots of land off of Hoyt Street. They purchased the land and have begun developing 94 new lots.

“We had 10 new homes built within a 10-year period, so on average, a home a year,” executive director of Sweetwater’s Economic Development Board Miesha Adames said.

Adames said she hopes the new, modern homes will help retain workers as well as boost the economic impact within the city.

“Our last large development was probably done back in the 80s. Prior to that, most of our large homes by the co

untry club area were built in the 50s and 60s,” Adames said.

The Betenboughs said they will develop the lots for individual sale for builders, assuring each home is exactly what the buyer wants.

Sweetwater Economic Development will be offering a $10,000.00 incentive per home to builders that build a house greater than 1,200 square feet in the Creekside Subdivision. For more information on the incentive guidelines, visit https://www.sweetwatertexas.net/wp-content/uploads/Creekside-Builder-Incentive-1-1.pdf.